Birman Cat with pot of flowers greetings card
£3.55
In Stock

I recently found some very old sketch books - nothing inspiring in them unfortunately, but it was interesting to see where my 2 lives crossed although at the time I couldn't see this. These are a couple of pages from 1981 when I was working on an archaeological excavation in France. This particular site, Pincevent, is fascinating - a site where hunter-gatherers set up camp in the autumn to ambush the migrating reindeer, about 12,000 years ago. 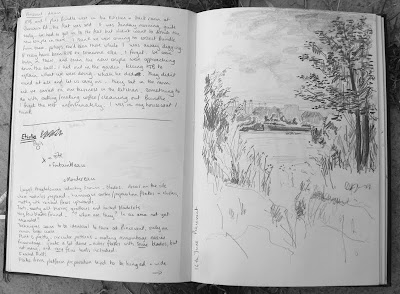 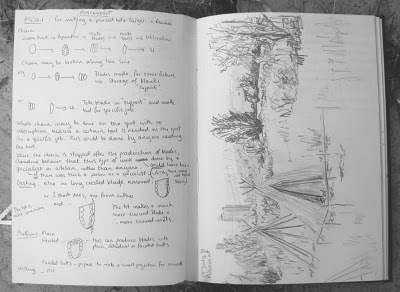 Sketches of the site, with the reconstructed tents, plus some random scribbling on the left - some of the scribblings are about the tools we were excavating and about whether they were produced by specialists/artisans - was there such a person as an artisan this long ago? Certainly the flint knapping was produced by skilled craftsmen. Some more of the scribblings are about another important Upper Palaeolithic site, Etiolle, and more is just some random boring dream I had! These 2 sketches are of the late Guy Celerier, the director of the excavations at Pont d'Ambon in the Perigord where I worked for several summers - a lovely, lovely man. 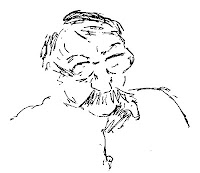 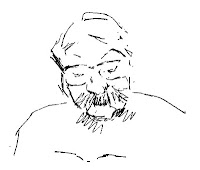 And these 2 sketches are from a much longer time ago, in 1972, when I worked on a Roman site in Xanten, in Germany - a rough sketch of the sites boudary fence and someone's rucksack! 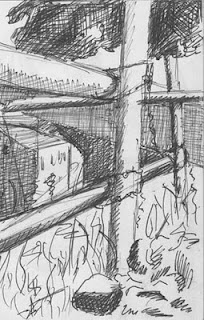 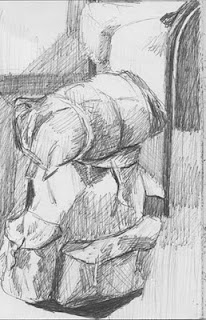